Conservation Senior Manager at Herefordshire Wildlife Trust
The River Wye has been the subject of discussion, protest and media attention this year. Senior Conservation Manager Andrew Nixon explores what's gone wrong and what needs to be done to fix it.

The River Lugg is not the only waterway in the county to have been in the news this year. In the summer, the Guardian drew attention to the algal blooms on the river Wye, caused by pollution from agricultural phosphates (https://www.theguardian.com/environment/2020/jun/20/its-like-pea-soup-poultry-farms-turn-wye-into-wildlife-death-trap ). In September, a petition was launched calling for halt on granting planning applications for new chicken farms in Powys – one of the causes of phosphate pollution in the Wye. (https://www.bbc.co.uk/news/uk-wales-54181261#:~:text=Anglers%20formally%20complained%20to%20Natural,by%20phosphates%20in%20chicken%20excrement.&text=Kate%20Bull%2C%2060%2C%20of%20Gladestry,the%20Wye%20had%20turned%20green.)

Like many groups, businesses and individuals, Herefordshire Wildlife Trust is extremely concerned about the current state of the River Wye and its tributaries but the problems are numerous and complex.

Rivers are home to so much of our iconic wildlife including many rare and protected species such as salmon, lamprey, shad, otter, white clawed crayfish, kingfisher and bats. Moreover, their meandering passages create corridors for wildlife to move through our landscapes whether through the water, the bankside reeds or the bordering floodplains.  The connectivity of watercourses also presents a unique challenge to their management and conservation: Herefordshire can be the recipient of problems generated upstream (the Wye runs from Plynlimon in mid Wales to the Severn estuary) - so cross-border and co-ordinated management and conservation is necessary to address problems effectively.  Furthermore, small tributaries extend far from the main river carrying problems with them into a wider landscape. Hence, even land management far from the main rivers can have an impact far downstream.

So, what problems are affecting the Wye?

High levels of pollution.  Phosphates from sewage treatment works, agricultural activities, and malfunctioning septic tanks are exceeding levels safe for the environment.  This can lead to algal blooms that reduce the oxygen levels in the water, and so inhibit the growth of aquatic plants.  An increasing proportion of phosphates entering our rivers come from agriculture with intensive poultry units identified as a major contributor. The ploughing of floodplains for arable land use is also high risk as the soil is more likely to get into the water during flood events, carrying with it nutrients and agro-chemicals.  Nitrates from agriculture can also cause similar problems to phosphates although they are less persistent in both soils and river sediments and so watercourses can respond more quickly to a change in management. Soil erosion is also a pollution problem in its own right as it smothers gravel beds important for aquatic invertebrates and fish such as bullhead as well as spawning sites for salmon and trout.

Invasive Non-Native Species.  A number of species are damaging the habitats of Herefordshire’s watercourses.  Himalayan balsam is now present along most of our watercourses often in dominant stands that outcompete our native wildflowers and plants.  It is often reported as being a beneficial for insects because its pink flowers are frequented by bumblebees and other pollinators, but this is misleading.  Research has shown that areas infested in Himalayan balsam see declines of 75% in spider populations, 64% decline in beetles and a 58% decline in true bugs 1.  On balance balsam is bad for our native fauna.  Himalayan balsam can also increase erosion as it can leave riverbanks bare and exposed in winter which can also add to nutrient and siltation pollution.

The notorious Japanese knotweed is also present along the banks of our watercourses.  It is much more localised than Himalayan balsam but more difficult to eradicate fully and so could present a bigger long-term problem if not controlled.  Similar to Himalayan balsam it can also create dense stands that outcompete native species.

The threat of invasion from new non-native species is ever present with the arrival of species such as killer shrimp (Dikerogammarus villosus) possibly carried on canoeing and fishing equipment.

Acidification of headwaters.   Acidity of watercourses is a problem caused by acid rain in the uplands and is made worse where commercial forestry is the dominant land use. It affects all aquatic organisms from simple invertebrates to fish.  As a result, these watercourses have extremely low pH following heavy rainfall.  These streams can appear to be clear and unpolluted but will often have very low invertebrate numbers and support less wildlife overall.

Physical barriers.  Herefordshire’s rivers benefit from being largely natural and unmodified but there are nevertheless physical structures that have a negative impact on wildlife.  Historic dams and weirs continue to present problems for migratory fish species.  Whilst many have been either removed or modified some still persist and prevent fish like salmon from reaching upstream spawning grounds.

Flood defence and channel modifications.  In some areas the rivers have been separated from their floodplain by embankments and all along the river there are man-made structures replacing stretches the natural riverbank and the wildlife they support.  We now understand that the traditional approaches of floodbank creation, channel modification and channel dredging do not provide long term, sustainable solutions to flooding.  We need re-connect rivers to their floodplains and use natural flood management to reduce flooding:  https://www.wildlifetrusts.org/slow-flow-how-nature-can-help-prevent-flooding .

Riparian management.  Historic routine management of trees along the riverbank is rarely practiced anymore and many old willows and alders that would have been pollarded in the past are now neglected.  Unmanaged trees can split or topple into the river causing damage to riverbanks as root plates are wrenched from the soil. Regular pollarding (felling the top of the tree a few metres up from the ground) extends the life of the tree and ensures its roots continue to stabilise the riverbanks.

Water quantity.  Our rivers frequently suffer in drought conditions.  Low flows mean smaller watercourses can dry out and water levels in larger rivers become depleted.  This leads to increased concentration of pollutants and prevents salmon from migrating upstream.  Changes to land use/management and erosion have affected the grounds ability to store and hold water, examples include loss of upland peat, loss of hedgerows, wetlands and permanent pasture and ground compaction.  Degradation of these habitats means that water is now lost from the system much more quickly.  When combined with abstraction for drinking water and irrigation we are losing the essential water stores that bolster low summer flows and provide habitat for wildlife.

Climate Change.  Our changing climate exacerbates many of the problems listed above.  It creates conditions suitable for new non-native species, pests and diseases; it causes our summers to be hotter and drier, increasing the regularity and severity of droughts and increases the frequency and severity of summer storm events that can lead to flash flooding.  It also increases water temperature which impacts on species survival rates, particularly overwintering salmon eggs.

What is Herefordshire Wildlife Trust’s Response?

Support for Farmers and Landowners.  Since 2015, with support from the Environment Agency and in partnership with the Wye and Usk Foundation, we have provided grants and advice for farmers to protect rivers and create new habitats.  This includes  fencing of rivers from pasture to prevent livestock eroding riverbanks; coppicing and pollarding of riverside trees; pond and scrape creation; and tree and hedgerow planting.  We have also prepared farm plans and Countryside Stewardship applications to help farmers access the resources they need.  We are also preparing farm plans through Environmental Land Management Scheme trials that help farmers identify what they can do to protect water resources and river habitats

Between 2016 and 2020 we worked in partnership with the Wye and Usk Foundation on the ‘Delivering the Nutrient Management Plan’ project through which we created 10,500m2 of reedbed on our Bodenham Lake nature reserve.  This reedbed created important habitats that also help absorb phosphate from the Lugg river system.  Similarly, in 2020 we purchased Oak Tree Farm which lies in the Lugg Valley below Dinmore Hill with a view to creating wetland habitats that will help enhance the Lugg Valley Wetlands and trap nutrients in flood water.

Invasive species:  In 2020 we released a Rust Fungus to infect and suppress the Himalayan Balsam on our Clifford Common nature reserve.  This is the first release in the Wye catchment and part of ongoing trials from across the UK.  The impacts will be monitored with the support of local volunteers.

Advocating for our River Wildlife.  We are part of many partnership groups that contribute to conservation of our rivers.  We are a member of the Wye Catchment Partnership; we have a seat on the Nutrient Management Board for the Wye catchment and are a partner in ‘Farm Herefordshire’, which formed to address the nutrient pollution problems associated with agriculture in Herefordshire.  We are on the steering group of the Herefordshire River Wye and Lugg Natural Flood Management (NFM) project.  In addition, we have developed partnership initiatives with other organisations such as the Wye and Usk Foundation (WUF) to deliver specific river related projects and support grass roots initiatives such as the ‘Save the Wye’ campaign and Friends of Bartonsham Meadows[2].

We continue to provide the role of watchdog for our rivers taking seriously the reports and concerns that the public bring to our attention and reporting potential breaches of environmental regulations where appropriate.  We are always prepared to hold the statutory bodies to account to ensure that our environmental laws are respected and adhered to.

What more needs to be done

However, despite all these efforts, problems still persist and, in some areas, are intensifying. While many landowners along the course of the Wye are managing land within the river’s catchment responsibly, pollution is still entering our rivers at unacceptable levels. While our work on the ground has achieved much in the Lower Lugg Valley, much more needs to be done upstream.

In order to improve our rivers, our environmental regulations must be adhered to and enforced strongly when they are not.  This is a task for our statutory bodies who in turn need greater support from Government and their new watchdog the Office of Environmental Protection. The public can help too by

Making more space for nature will give our struggling wildlife the chance to recover and also restore beautiful wild places. 30% of land and sea is the bare minimum that nature needs to start recovering but we are far short of this and need your help to turn things around...

Donate today: together we can save wildlife 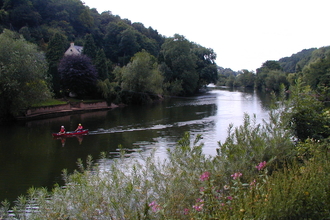 Natural Resources Wales has published evidence outlining phosphate levels in the River Wye: over 60% of the river fails to meet its…

Helen Stace updates on the tragic state of the River Wye and the impact on our wildlife.

Claire Spicer, our Catchment Advisor for the 'Restoring Our Amazing Rivers' project, tells us about her work in Herefordshire…