Natural Resources Wales has published evidence outlining phosphate levels in the River Wye: over 60% of the river fails to meet its targets.

Today[1], finally, Natural Resources Wales (NRW) has published evidence outlining phosphate levels in the River Wye Special Area of Conservation (SAC) which shows that over 60% of the river fails to meet its targets (probably more, since there is insufficient data to assess three of the sub catchments) and the sub catchments that aren’t failing have little headroom to accommodate any additional phosphate. This means that only limited additional development that does not demonstrate nutrient neutrality or betterment will lead to further waterbodies failing.

Depressing though this outcome is, Herefordshire Wildlife Trust welcomes the formal recognition of a problem that has long been evident from everyday observations of the river, including the recurrent algal blooms.

The River Wye and its precious wildlife is much loved by the people of Herefordshire who have been highlighting its plight increasingly vehemently as the algal blooms have become more frequent, prevalent and devastating for wildlife.

We expect Natural Resources Wales to work urgently on multiple levels to address this problem, both through its own monitoring, advice and enforcement activities and in providing robust advice to relevant competent authorities.

Clearly, all further development proposals, including those for poultry units, must be evaluated for their impacts on phosphate - alone and, crucially, in combination with others. This must take into account both direct and indirect impacts. Direct impacts from poultry units include drainage from the units and run off from free range areas, whilst indirect impacts derive from the use of litter and waste from the production cycle once it enters the agricultural system.

Approximately two thirds of the phosphate problem, as long recognised in the Nutrient Management Plan for the River Wye, derives from agricultural practice. Factors include the over application of phosphate fertilisers (as manure and litter, bagged fertilisers and sewage sludge) and poor agricultural practice leading to soil compaction, bare soils and runoff.  Furthermore, we have a problem of a legacy phosphate, whereby historic over application has led to a build-up of phosphate that is likely to take many years to deplete. We expect NRW to ramp up its monitoring and inspection regimes and take a stronger line on enforcement of poor practice.

Herefordshire Wildlife Trust calls for greater resourcing of the statutory agencies in England and Wales to:

The problem with phosphates

In the Welsh Marches phosphate occurs naturally in the soils but is also added to our agricultural landscapes through a range of agricultural activities including the spreading of chicken waste from broiler sheds, the application of bagged fertilisers and the application of sewage sludge. Because of the ready availability of phosphate-rich materials and the ever-increasing pressures to increase production, phosphate is now applied in excess of agricultural needs and is building up in our soils.

Soils act a sink to trap phosphate, but then release phosphates into our streams and rivers, especially when heavy rainfall erodes soil from the surface of bare fields and carries it into the water.

Phosphates acts as fertilisers in streams and rivers too and causes proliferation of algae to form algal blooms which are now replacing the once beautiful beds of water buttercup that used to flourish in the river. The alga smothers other vegetation and uses up vital oxygen supplies for fish and other freshwater wildlife.

The soils and silts carrying the phosphate are also of concern as they smother the formerly clean river gravels which are so important as nursery beds for spawning salmon and trout.  The silt can also clog the gills of freshwater invertebrates and the pores of freshwater plants, reducing the diversity and abundance of our natural river wildlife.

So, in the Welsh Marches phosphate problems are due to a combination of our soil types, our predominant agricultural practises, with over application of phosphates and the impact of changing weathers patterns as climate change makes increases the magnitude and frequency of storm events.

The history of phosphate pollution

In response to this report, work began on a Nutrient Management Plan (NMP)[2] for the River Wye. In Herefordshire, the policies for permitting further development in the Wye catchment are conditional upon the delivery of the NMP targets to mitigate phosphate pollution in the catchment.

The NMP is underpinned by a technical report which shows apportionment of phosphate inputs for different sources.  Principal sources are Sewage Treatment Work and agriculture.

Sewage Treatment Works: those with high phosphate loads are all being targeted for improvement works to improve phosphate stripping and as these improvements come online, the proportion of phosphate from agricultural sources will increase.

In Herefordshire, the Lugg, a tributary of the Wye, is now failing to meet its phosphate targets.

[3]In November 2018, the European court of Justice handed down a judgement on the implementation of the Water Framework Directive, known as ‘The Dutch judgement’.  This sets a legal precedent for the treatment of development likely to impact on water quality of SACs.  In response to this judgement, in 2019, Natural England issued further advice to Herefordshire Council as planning authority.

[4]In March 202 Herefordshire Council accepted the advice that the Dutch Judgment means that NMP cannot be relied upon to provide adequate mitigation for the identified adverse effects of development on the  integrity of the SAC.

There is now a moratorium on new development unless the development can definitively be shown to be ‘nutrient neutral’ or achieve betterment in order to show no adverse impacts on the integrity of the River Wye. 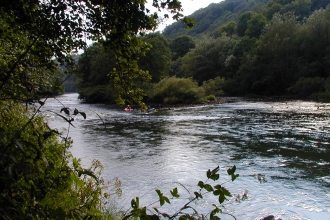 The River Wye has been the subject of discussion, protest and media attention this year. Senior Conservation Manager Andrew Nixon…

Major damage to River Lugg in Herefordshire will be test case for Government commitment to strengthen wildlife protection.