In 2018, Herefordshire Wildlife Trust secured funding from the National Lottery Heritage Fund and European Regional Development Fund for the Lugg Wetland Gem project. The aim of this project was to develop a volunteer group at Bodenham Lake and to reshape three areas of the lake’s shore (steep sides are a legacy of its past life as a gravel pit) to create shallows where reed bed could establish. Reedbed is one of the most important habitats for birds in the UK and supports a wealth of wildlife including otter, fish, toads, moths and harvest mice.

The reshaping was successfully completed over the autumn of 2018. Since then, the shallow waters have been planted up with thousands of reed plants by volunteers and protected from grazing geese by temporary fencing. We were thrilled with the success of the project, which was awarded a national award for work in the natural environment by the Canal and Rivers Trust.  We are looking forward to the reedbed becoming more established and bringing more wildlife to the site.

The uniform and dense cover of willow and alder on the islands of Bodenham Lake means the islands are only suitable for a limited range of wildlife to feed and nest. In 2019, we were successful in securing further European Regional Development Funding, smaller grants and generous donations from our supporters which allowed us to undertake a second phase of work, focusing on three of the Lakes islands.

An old tree covered roadway, locally known as the spit, was lowered and divided into several islands making it suitable for reedbed to be planted in the spring. Two turned root balls were left on these islands to encourage otter to form holts (where they raise their young). .

Bodenham Lake has limited numbers of wetland birds such as oystercatchers, little ringed plover and lapwing due to a lack of suitable nesting sites and muddy areas in which they like to feed for insects. Many wetland birds nest on the ground, in areas without trees, so that they can spot predators approaching the nest. The tree cover on the islands and the shore of the lake stops them nesting. Three new islands tailor made for ground nesting birds are being created in front of the Southern bird hide and a muddy area for wading birds is being created to the left of the Southern hide. We hope this work will help to conserve these species which are undergoing dramatic declines.

Unfortunately, before these earthworks were completed, the River Lugg, which runs alongside the reserve, burst its banks. Though the river regularly floods, this was the worst flood in 30 years. The work halted and the machinery was removed from site. As water levels remain high, we are yet to fully assess the extent of the damage. We are currently raising funds to enable us to restart the island work next autumn.

We have carried out the work in autumn so that we don’t disturb breeding birds– unfortunately this is the muddiest time of year . The nature of both phases of the project – bringing machinery and moving earth on a wetland site – mean that the reserve has not been looking its best. This is an unavoidable consequence of undertaking this type of work which will have huge benefits for wildlife in the long term. Tyre tracks and mud have been worsened by the wet weather and the drainage of flood waters has scoured one of the paths. We are working to improve paths as soon as possible.

A Nature Reserve for Wildlife and People

Throughout the projects, we have worked equally hard to make improvements at the site for human visitors as well as wildlife. In 2017, we installed a new bird hide on the north side of the lake (thanks to additional funding from private donors and the Herefordshire Ornithological Club.) We have improved and updated signage and interpretation on the site with more improvements to follow. This year, we are fundraising for a third bird hide which will be closer to the car park. This will be a more accessible hide with a surfaced path leading to it and a ramped entrance. We continue to run walks and activities for all ages at the Reserve – go to www.herefordshirewt.org for event listings or find the Bodenham Lake page on Facebook.

Why have you cut down trees?

During the course of the project, we have removed some trees from the edges of the lake and on the islands. This is to create suitable habitat for the wetland wildlife at Bodenham Lake – and encourage more to live and breed here. Supporting, and increasing, biodiversity is an important part of creating an ecologically resilient landscape. Biodiversity loss is one of the biggest ecological threats facing our world today and, in the UK, wetland bird species are facing dramatic declines. Increasing tree cover is also incredibly important but we should be creating new woodlands in areas of low ecological value and greening our cities. Wetland sites and wildflower meadows should be maintained for their intrinsic value and benefits to wildlife, and allowed to exist alongside (more) woodlands, hedgerows and wood pasture.

What has happened to the timber? 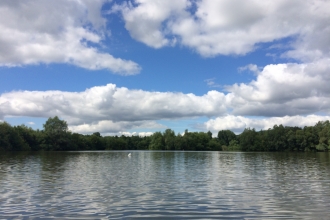 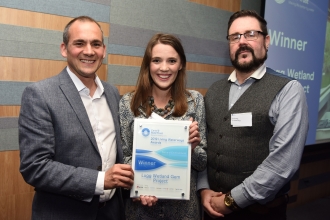 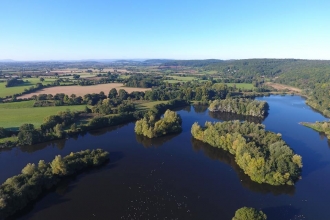 This information evening is about the works to improve Bodenham Lake Nature Reserve for wildlife.

The Impacts of Flooding on Wildlife

How will the recent storms and floods have affected our wildlife?

Exciting times at the Lake...