https://twitter.com/HelenStace_HWT
Chief Executive, Herefordshire Wildlife Trust
Our Chief Executive Helen Stace gives some background and context to the recent destruction of a stretch of the River Lugg

When I first came to Herefordshire 26 years ago as a Conservation Officer for English Nature – now known as Natural England – I was closely involved in the decision to declare the River Lugg a Site of Special Scientific Interest (SSSI) because of its outstanding importance for wildlife.  My small team spent hours walking the whole length of the river and contacting all the owners to make sure they were all aware of the special nature of the Lugg. We explained why it was important for wildlife and a list of activities that were likely to damage it – for which they would have to have consent before carrying out.

Little did I suspect that over a quarter of a century later that as Chief Executive of the Herefordshire Wildlife Trust, I would be called upon to defend the very river that I thought I had protected all those years ago.

What happened to the River Lugg?

At 8.06pm on Tuesday 1st December, one of our members alerted us to the fact that an area of the River Lugg appeared to have been bulldozed and reprofiled, with all trees grubbed out and vegetation scraped away down to bare earth. By 11.20pm another source had confirmed that a major incident had occurred.

First thing the next day, one of our reserves officers walked the public pathway to view and photograph the work and report back – checking that the reports were correct. Sadly, it was worse than we feared. The River Lugg SSSI had been bulldozed over a stretch about a mile long; we all felt absolutely devastated.

What impact will this have?

The initial informant reported that a 16-tonne excavator had been working in the river and it is clear that this has been used to widen the channel, drag up the gravel beds onto land, reprofile the bank and spread spoil over a considerable area of land behind the bank.

All the trees and vegetation immediately upstream of the bridge have been removed and the riverbank lies straight and bare, with every vestige of wildlife destroyed.

This was formerly one of the most attractive stretches of the river. It was the haunt of otters and kingfishers, and the riverbed gravels would have been key spawning grounds for salmon and trout, which should be spawning (laying eggs) right now. The eggs settle down into the gaps between the stones where they are protected from predation and are oxygenated by water flowing through the stones.

In addition to the direct destruction, the work has mobilised tonnes of soil into the water. This will have drifted downstream, settling into the riverbed over a considerable distance. This silt clogs up the river gravels, smothering the fish eggs and depriving them of oxygen. It also damages the gills of freshwater invertebrates and smothers plants, as well as carrying agricultural pollutants such as phosphate into the water.

With no vegetation to stabilise the backs until next spring, every time the river floods this winter soil will pollute the water.

How could this happen?

Work of this scale requires a range of formal consents:

To obtain these consents, a landowner has to submit sufficient ecological information to identify, avoid and mitigate any impacts on the Special Area of Conservation further downstream, to the competent authority to enable them to carry out a Habitats Regulations Assessment.

In cases where environmental legislation appears to have been breached, the relevant Statutory Authorities must investigate the incident and where there is sufficient evidence of a breach, they should consider the option of prosecution.

Now that the relevant authorities are involved we will be awaiting the outcome of the investigation.

What next for the Lugg?

The most urgent problem is the fact that the river banks are now just bare soil, which will wash into the river in the next flood.  Some vegetation will re-establish over the summer, but it will be decades before trees, with their network of stabilising roots re-grow to bind the bank.

We expect the statutory agencies, including Natural England and the Environment Agency to require reinstatement of this river, in addition to investigating the case for prosecution.  This will be a clear test of Government’s commitment, as the UK leaves the EU, to achieve its aspiration of being a ‘world leader in environmental protection.’

However, since I left Natural England, this statutory agency has seen its budget slashed from £265m in 2008 to only £85.6m in 2019/20.  In Herefordshire we noticed the effect this has had on the ground as the number of staff looking after our beautiful county and fragile wildlife have continued to diminish. I know from personal experience that most of Herefordshire’s grassland SSSIs require annual monitoring visits.  The maximum recommended monitoring cycle is six years.  However, many of the sites in the county, including this stretch of River Lugg have not been assessed since 2010. This is unacceptable.

Meanwhile, cuts to the Environment Agency budget have also reduced the feet on the ground and made enforcement of infringements difficult to pursue, at the time when the threats to the river are massively increasing.  Figures released by the Environment Agency in September 2020 figures showed that a magnificent 0% of river, lakes and streams in England are in good health.

These cuts need to be reversed to resource our environmental agencies to the level needed in our modern world.  We need the Government to pass a strong Environment Bill which will transfer and strengthen environmental legislation as we leave the EU.  The bill will establish a new Office of Environmental Protection, which must be strong, well-resourced and, most important of all, an independent entity with teeth.

Flooding is a truly terrible reality, which can devastate lives. However, the bulldozing of the River Lugg is unlikely to resolve local flooding problems. Although this river is one of the most natural in the country, it is suffering from a range of harmful activities many of which have accelerated since the river was given the protection of SSSI status.  Since the 1990s, huge expanses of floodplain meadow alongside it have been ploughed up, initially for potatoes and now increasingly for crops such as maize along the Lugg.

In former days, rough uncultivated grassland, with fringes of trees, acted as a sponge to absorb rainwater into the soil and slow the flow of water across the floodplain.  However, the most recent intensively farmed potato and maize fields become compacted by farm machinery and the soil is left bare and exposed for large parts of the year.

Rain flows over the surface of the bare soil, washing it into the rivers and taking with it agricultural chemicals, including the phosphate fertilisers which are so damaging to river wildlife.

Meanwhile, the upland parts of the river are still subject to over-grazing by sheep with the added new threat of free-range chickens denuding large areas of vegetation.  Once again, these are speeding the flow of water into the river, this time adding chicken faeces to the mix.

This is all happening at a time when climate change, brought about by rising CO2 emissions, is starting to change weather patterns, including increasing the frequently and size of storms.  All these factors are combining to increase the number of flash flood events on the river.

Time to slow the flow

We need to accept that our rivers need to be naturally functioning systems and use natural flood management measures to slow the flow of water reaching rivers. Dredging is often cited as a key solution to flooding, but widening, deepening or straightening river channels with the aim of conveying water downstream more quickly can sometimes have little positive effect, and is far from risk free, as this blog by the Chartered Institute of Water & Environmental Management  sets out. In rural areas there may be scope to allow water to flow out into the floodplain, which creates extra capacity to hold water in soggy grassland or riverside woodlands which prevents it rushing to built-up areas downstream.

What does recent damage to the River Lugg tell us about the state of environmental law enforcement? A blog post from 14th December 2020 as part of the Green Alliance blog by Herefordshire Wildlife Trustee Matt Williams.

Speak up for wildlife!

We need a legally-binding ‘State of Nature’ target on the face of the Environment Bill to restore nature by 2030.

Please take two minutes to ask your MP for their support today! 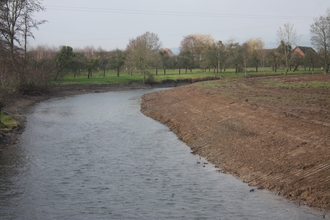 Major damage to River Lugg in Herefordshire will be test case for Government commitment to strengthen wildlife protection. 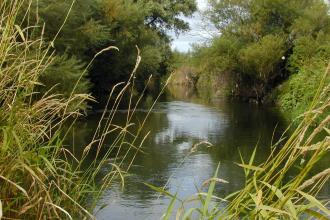 The River Lugg is designated a Site of Specific Scientific Interest (SSSI), and a Special Area of Conservation (SAC) in its lower… 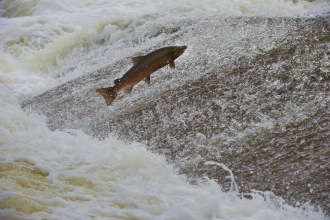 The Atlantic salmon spends most of its life at sea, but makes an epic journey back to the river or stream in which it hatched to spawn.…

Claire Spicer, our Catchment Advisor for the 'Restoring Our Amazing Rivers' project, tells us about her work in Herefordshire…

Two linked projects are currently happening on the Yazor Brooks: downstream, in the City, our Yazor Brooks Restoration Project is…