Curlew declined by 46% across the UK from 1994 to 2010 and the species was added to the UK red list in in December 2015. The exact number of breeding pairs of curlew in Herefordshire is unknown but is certainly declining. The Birds of Herefordshire report of 2018 states that there were 187 records from 46 sites - an increase in records from the previous year but as a result of increased monitoring rather than an increase in the number of birds in the county! (We are recruiting more volunteers this year to help build a true picture of curlew numbers in the county.) However, confirmed breeding was reported at only three sites and only one of these nests saw chicks fledge successfully. 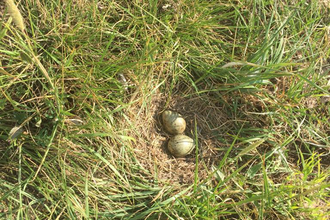 Despite the Covid-19 lockdown, or perhaps in some cases because of it, the project has managed to rack up some remarkable achievements… 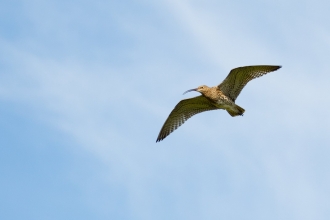 Seen (or heard?) a curlew in Herefordshire? Let us know! We're working with the Herefordshire Curlew Project to build up as… 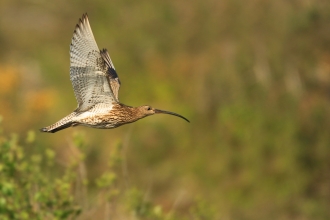 Can you help us protect Herefordshire’s Curlews?
Fieldwork starts at the end of March and can be fairly intensive throughout April…

With a haunting call and unmistakable long, curved bill, the curlew is an iconic wetland bird. In the past, curlew bred in significant numbers on Lugg Meadow but have drastically declined in recent decades. Last spring, just three pairs attempted to breed on Lower Lugg Meadow, though none successfully raised a brood.

Each spring, Herefordshire Wildlife Trust and Herefordshire Ornithological Club encourage people to keep dogs on leads on the Upper Lugg Meadow while the Lower Lugg Meadow is closed to the public under the CRoW Act from 1st March to 31st July each year to ensure the birds are not disturbed. This year we are taking further action, installing temporary electric fencing around the areas where the birds nest. The fencing will protect the nest from predators such as foxes but preventing disturbance from any people that stray on to the site is equally important: if walkers or dogs disturb a bird while it is sitting on eggs, it will often fly up, leaving the nest vulnerable to predators like crows. Curlew no longer nest upon the Upper Lugg as there is too much disturbance from dogs, which is why we are asking people to keep their dogs on a lead during the breeding season.

Curlew declined by 46% across the UK from 1994 to 2010 and the species was added to the UK red list in in December 2015. The exact number of breeding pairs of curlew in Herefordshire is unknown but is certainly declining. The Birds of Herefordshire report in 2017 states that there were 77 records from 33 sites. Though not confirmed, it is thought that curlew bred at just seven of these sites so ensuring Lugg Meadow continues to support a breeding population is vital. Curlew are faithful to their breeding grounds so once all breeding pairs are lost from a site it is unlikely they will return in future years.

Pete Johnson, Herefordshire Wildlife Trust’s Reserve Officer for Lugg Meadow commented: “to have curlew so close to Hereford City is really special and we want to do all we can to bolster this population. It’s magical to hear them across the meadow and would be great if they bred successfully here this year.”

Anyone wishing to be involved with caring for Lugg Meadows and its wildlife should get in touch with Herefordshire Wildlife Trust who support a volunteer group which carries out habitat management and monitoring of the curlew at the site. enquiries@herefordshirewt.co.uk / 01432 356872.

Support our efforts to monitor and conserve Herefordshire's curlew

Many thanks to those who have already donated towards our curlew appeal. We have raised over £600 so far. This is being spent on:

As well as being able to see if and when eggs hatch and chicks nest, this equipment also means we can better understand the disturbance and predation pressures affecting breeding curlew.

Any funds raised also help to cover staff and volunteer support and training.